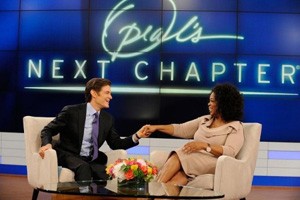 By now you may have heard that Oprah Winfrey is coming back to television. Her new show “Oprah’s Next Chapter” is premiering New Year’s Day on the OWN Network. Oprah recently sat down with Dr. Oz to talk about how she is working through the new changes in her life, and what others can learn from it.

So what does Oprah miss most about doing her show? “I miss the audience, I miss the people…what I miss the most is talking to people,” Oprah said, as reported by EmaxHealth.

Her new show takes her out of the studio and on the road, which will allow her to connect with people once again. “The most important thing for me was to be able to make the transformation to something really different, so I wanted to get out of ‘the chair,’” she said. “I think that for 25 years I’ve felt like, ‘I’m in the chair, I’m in the chair.’ And so, I’ve been out of the chair and out into the world just talking to people who I thought were interesting.”

Some of these include talking to George Lucas and Cuba Gooding Jr. about a movie that tells the story of the Tuskegee Airmen; eating a meal with members of a Jewish Hasidic family who had never heard of Oprah before; fishing with Paula Deen at her home in Savannah, Georgia; discussing drug use with Steven Tyler in his home; and, fire-walking over hot coals with Tony Robbins. She also plans to visit India with Deepak Chopra and Haiti with Sean Penn.

“I believe that there are multiple ways of reaching people…and I believe that my calling—and everybody in here has a calling—has been since I was three years old and speaking in a church in Mississippi, was to be a sweet inspiration where I could. And to literally allow people to see for themselves how your life can be better—and I can do that through telling stories,” Oprah said on the Dr. Oz Show. “The purpose of the network is to create a space where people can come and get little pieces of light, little pieces of inspiration that will lift them up. I always wanted to have a platform where people could come in and see the best of themselves.”

“How do you know when you are ready for transformation?” Dr. Oz asked Oprah. She explained that we all go through patterns of change and growth and we reach a point where we have gone as far as we can emotionally and spiritually, and we need to move on toward another level to begin growing again. This is the point she reached with “The Oprah Winfrey Show.”

Dr. Oz also asked Oprah how she manages to stay true to herself and what she believes in when she has so many people with differing expectations of her.

“It’s about knowing steadfastly who you are and knowing what your vision is for your life and holding onto that… I have a vision for the future and I am steadfast in pursuing that until at some point I recognize that I should be pursuing something else,” she said. “You are not defined by what other people say about you. You are not defined even by what you do. But you are defined at this moment, by the hope and the light that you bring to this moment.”

Oprah also shared that she and her staff have begun meditating daily after visiting a town in Iowa where one third of the entire town is focused on transcendental meditation. “You cannot imagine what’s happened in my company,” as a result of meditation, Oprah explained. “People who used to have migraines—don’t. People are sleeping better. People have better relationships. The one thing I want to continue to do is to center myself every day and make that a practice for myself because I am 1000 percent better when I do that—when I take myself back to something bigger than myself.”

One thought on “Oprah Talks Transformation and Meditation with Dr. Oz”