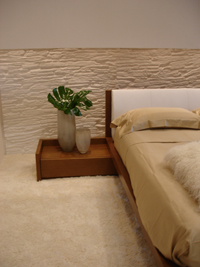 Did you know feng shui is based on many of the same principles as acupuncture? Neither did we, but Cathy Wong, a licensed naturopathic doctor and certified nutritionist explained this an more in an article on About.com.

“Instead of energy or “chi” flow in your body, feng shui is said to improve the flow of chi around you, which is thought to improve health,” she said.

The article identifies important feng shui principles to be applied to the bedroom, which can affect the quality of sleep, said Wong. Below are some tips she offers to get the ‘chi’ flowing in your bedroom!

How to Position Your Bed – You should be able to see the bedroom door without being directly in front of or in line with it, and the head of the bed should be placed against a wall rather than under a window or away from the wall, she explained. “A bed against a window is thought to cause chi to enter and leave through the window, resulting in restless sleep,” said Wong.

Also, a bed shouldn’t be positioned under a structural or decorative beam or ceiling fan because feng shui says this isn’t good for health or relationship. Can’t move the bed? Feng shui practitioners recommend hanging a bamboo flute (a special feng shui device) from the beam to offset the effects, said Wong.

The Bedroom Should Only Be a Bedroom – A bedroom without a television? Feng shui says yes, according to Wong. “Television, computers, exercise gear or a workspace in your bedroom are thought to distract you from rest, symbolize wakefulness and take up energy,” she said. If you don’t’ want to move the television, she recommends putting in an armoire and keeping the door closed while you sleep, or simply place a piece of fabric on it to cover the television at night. Finally, if you need to keep the exercise equipment or workspace in the bedroom, consider a screen to block it from your view when not using it.

Keep It Clutter-Free – According to Feng shui, clutter “can block the flow of chi, lead to stagnation, disturb sleep and generally prevent things in your life from moving forward,” Wong said. And you know all that stuff you have shoved under your bed because you had no place to store it? This area should actually be kept clear and clean, along with the closet. And keep the closet door closed at night or “it’s thought to be depleting,” she said. Lastly, nightstand drawers and dresser should be organized, and don’t pile books on top of them.

Watch the Mirrors – Feng shui says if you aren’t sleeping well, a mirror in your bedroom may be to blame because they are thought to bounce energy around the bedroom, said Wong, explaining they are also said to amplify worries. If they are needed, avoid placing them next to the bed or on the wall above. “You shouldn’t be able to see yourself reflected in a mirror while laying in bed,” said Wong. Covering them with fabric when going to sleep – similar to the television – can also help.

Pair Accessories, Use Relaxing Themes & Rounded Corners – “When selecting art for your bedroom, avoid sad or upsetting images and avoid images with only one person, which symbolize solitude,” Wong said, adding we should also be cautious of water as a dominant theme, which in the bedroom may promote financial or relationship losses. However, inspiring, relaxing or uplifting art is a good choice for the wall opposite the bed.

Also, when accessorizing, stick to pairs, such as two nightstands, and ovals and circles are better than sharp corners, said Wong.

Avoid cooler colors, such as gray, blue and stark white because they are believed to interfere with relaxation. Wong suggests a balance of 50 percent warm skin tones and 50 percent cool blue, green or lavender.