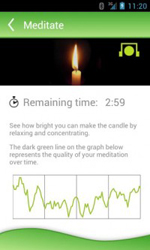 The app allows users to track and improve their meditation practices over time by reporting the quality and duration of their meditation sessions, as well as other helpful metrics. Data from each meditation session is gathered using NeuroSky’s MindWave Mobile headset, which is an EEG device that reads small electrical impulses emanating from the brain via a Bluetooth to transmit them through strategically placed electrodes, allowing users to monitor their progress as they melt into a more personal meditation.

Transcend can tell when a user is successfully achieving meditative states regularly, or whether a user may benefit from an alternative form of meditation. By measuring and recording meditative states, a person can track his or her progress and receive confirmation their meditation has been effective.

“This is the first mobile meditation app that gives constructive feedback based on actual neuro-imaging,” said Tony Gaitatzis, CTO and co-founder at Personal Neuro Devices. “Transcend incorporates proprietary brain-activity-analysis algorithms and is based on research studies with individuals who are new to the practice of mediation as well as experienced users.”

Transcend is available for Android in Google Play while an iOS version has just been submitted to the Apple App Store and will soon be available, according to the company. For more information, visit the NeuroSky app store.

One thought on “Transcend: A New Meditation App with Neuro-Feedback”